We welcomed over 150 guests as we celebrated the launch of the centre, with entertainment from Professor Pumpernickel and a showcase of experiments from our Year 6 pupils.  As Mrs Hensman officially opened the centre, a pyrotechnic display punctuated the air and a shower of confetti rained down on the children- much to their delight! 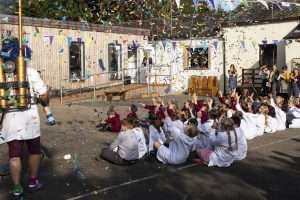 We were also thrilled to welcome Kayleigh Daniels, REACT Engineering’s Foundation Trustee as guest speaker at the event.  She helped inspire the schools’ future scientists (and their parents) citing the discoveries of local Cumbrian scientists such as John Dalton who discovered the atom and demonstrated that there are no boundaries to what the children could go on to discover in their future careers.

Going forward, we will use the Science Centre to teach S.T.E.M subjects with a focus on science and we’re very much hoping in time to extend invitations to other primary schools in the area who may want to come and share science events hosted by the school, thereby inspiring the next generation of scientists, as we do with our sports events at present.

We are really excited to have our science centre fully kitted out and up and running ready for the new term.  We would like the new science centre to be a resource for us and for other schools to come and learn with us, make connections and give children in the Eden area the opportunity to ignite their imaginations and inspire a love of science at an early age.

The science centre was built ahead of schedule after huge efforts by the Hunter Hall community, with kind donations from parents, friends, local businesses, and tireless fundraising from pupils and our parents’ group, meaning that the centre is now fully kitted out with microscopes, Bunsen burners, lab coats and other such science paraphernalia.

This website uses cookies to improve your experience while you navigate through the website. Out of these cookies, the cookies that are categorized as necessary are stored on your browser as they are essential for the working of basic functionalities of the website. We also use third-party cookies that help us analyze and understand how you use this website. These cookies will be stored in your browser only with your consent. You also have the option to opt-out of these cookies. But opting out of some of these cookies may have an effect on your browsing experience.
Necessary Always Enabled
Necessary cookies are absolutely essential for the website to function properly. This category only includes cookies that ensures basic functionalities and security features of the website. These cookies do not store any personal information.
Non-necessary
Any cookies that may not be particularly necessary for the website to function and is used specifically to collect user personal data via analytics, ads, other embedded contents are termed as non-necessary cookies. It is mandatory to procure user consent prior to running these cookies on your website.
SAVE & ACCEPT