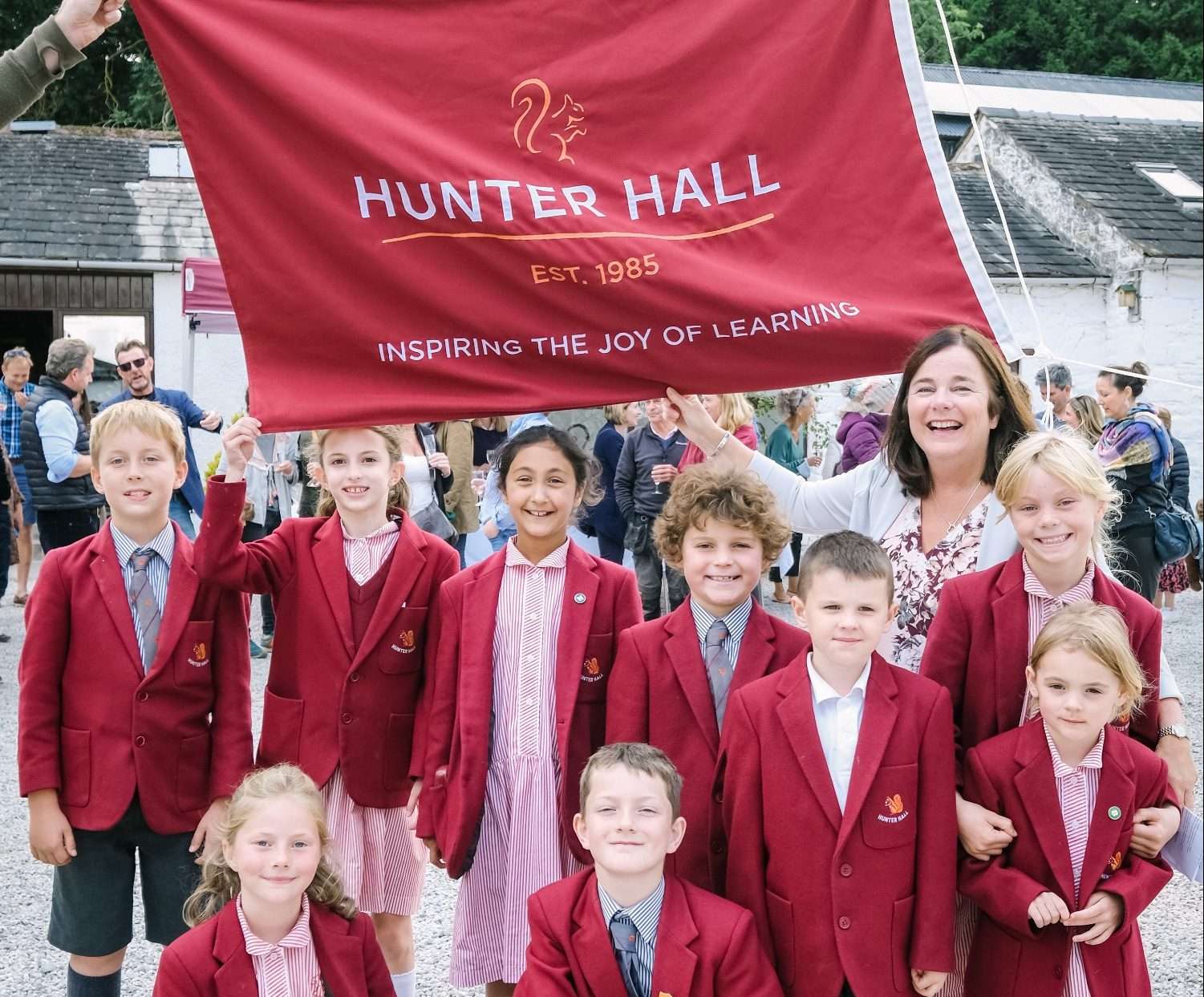 This weekend, Hunter Hall, Cumbria’s only independent primary school began, what will be, a series of special events to mark30 years of inspiring learning on its current site at Frenchfield on the outskirts of Penrith.

Children, parents, teachers, governors and former ‘Hunters’ enjoyed an afternoon on the theme of ‘flying high’. Entertainment took the form of a falconry display and musical performances from the pupils. The formal celebrations included ‘the loyal address’ followed by the hoisting a magnificent school flag flying high over the school, before tea and birthday cake was served to all who attended, whilst the children sang songs from four decades – 1991, 2001, 2011 and 2021.

Hunter Hall primary preparatory school was born in 1985 after a public meeting in Penrith addressed by Viscount Whitelaw gave its approval. When it opened in September of that year it had the sum total of 25 pupils. However, it did not start its life on the site it occupies today, but instead in the village of Great Salkeld and in fact in the actual house of its inaugural Headmaster Aiden Warlow. The school grew and developed and by 1991 space was at a premium and new premises had to be sought.

A helping hand came from the Rowley family who were looking to let out what was then a working farm on the outskirts of Penrith. Much work had to be done, as the buildings were more used to hosting cows and sheep rather than children! Dedicated staff, parents and governors helped to create classrooms out of cow byres and created the footprint that you see today. Lord Whitelaw presided over the opening of the school in its new buildings in December 1991. The school continued to prosper under the headships of Mrs Louise Dexter (one of the school’s staff original members) who took over as Headmistress in 1993 and later Mr Alan Short who took the helm, followed by Dr Anthony Winzor in 2009.

Developments in the fabric of the building continued to unfold too with the opening of Nutkins Nursery  (now Hunter Hall Pre- School )in 1996, the Dutch Barn in 2010 , a new library in 2012 and a science centre in 2018

While the business of teaching and learning continues to evolve and the school embraces each and every opportunity, the school site retains its original character.  Where once there stood a farm, the footprint remains the same and the laws of the farm still echo around the building:

’In here was once a farm, and the laws of the farm still apply, no short-cuts to success, but daily hard work produces wonderful results’.

“September marks the start of a very special year in the school’s life. It’s been wonderful to welcome our current families, governors and Old Hunters to our ‘Flying High’ ceremony today and we have so much more planned  including a 30thanniversary  concert celebrating 30 years of musical excellence in 2022 amongst other events this year. In the meantime we’d really love to hear from Old Hunters who’d like to help celebrate this milestone with us – either by sharing experiences, memories, their particular talents or just rekindling their connections with this incredibly special school.”

Any former pupils who would like to get involved in the 30th anniversary celebrations are encouraged to email office@hunterhall.cumbria.sch.uk

Hunter Hall is Cumbria’s only independent preparatory and pre-school for children aged 3 – 11 years and is located on the outskirts of Penrith. For more information, visit www.hunterhall.co.uk

This website uses cookies to improve your experience while you navigate through the website. Out of these cookies, the cookies that are categorized as necessary are stored on your browser as they are essential for the working of basic functionalities of the website. We also use third-party cookies that help us analyze and understand how you use this website. These cookies will be stored in your browser only with your consent. You also have the option to opt-out of these cookies. But opting out of some of these cookies may have an effect on your browsing experience.
Necessary Always Enabled
Necessary cookies are absolutely essential for the website to function properly. This category only includes cookies that ensures basic functionalities and security features of the website. These cookies do not store any personal information.
Non-necessary
Any cookies that may not be particularly necessary for the website to function and is used specifically to collect user personal data via analytics, ads, other embedded contents are termed as non-necessary cookies. It is mandatory to procure user consent prior to running these cookies on your website.
SAVE & ACCEPT